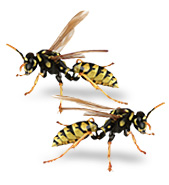 Wasps, hornets and yellow-jackets can pose significant health risks as stinging insects, especially to those allergic. They (wasps/hornets) build nests on the exterior of homes and buildings as well as on playground equipment, beneath decks/railings and patio-furniture, as well as nests in the ground, shrubbery, lawns and structural-voids in the case of yellow-jackets. Another cause for concern is when nests are built inside homes and buildings, sometimes under attic insulation and undetected until they break through a drywall ceiling into a living area such as a bedroom. Yellow jackets commonly enter through cracks and crevices/gaps in foundations and nest in walls and basement areas/crawlspaces, often emerging into living areas. Treatment of exterior areas, such as eaves, soffits, rooflines, beneath decks etc., can gain control of existing infestations and prevent future ones. Treatment of individual or multiple-nests inside and outside structures is often necessary to address immediate concerns. Nordstrom Pest recommends an annual service after initial-treatment, to prevent future-infestations
Scroll to top