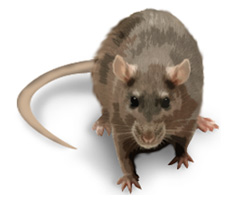 Rats require an opening of only 1/2 inch in diameter to gain entry to a structure and infest many homes, businesses and commercial properties. They pose great risks and cause much damage to Peoples health and property. They gnaw-on wiring and contaminate food, surfaces it is prepared-on and areas where it is stored. Rodents are thought to be responsible for approximately twenty-percent of world fires annually and have been linked-to certain hanta virus-strains, food-poisoning caused by salmonella bacteria, as well as the spread of diseases, such as plague, leptospirosis, typhoid and dysentery.

Appearance: Norway rats have coarse reddish to grayish-brown fur w/ white under-belly parts, but many color variations exist, including black. The body is stocky and approximately 12-16 oz. in weight, has a blunt-nose, small ears and semi-naked, scaly-tail, which is shorter than the combination of its-head and body.

Evidence of: Droppings are approximately 3/4 of an inch-in length and often found in kitchen, basement, attic and garage areas or where-ever harborage is available. Burrows or tunnels in insulation or dirt, in and around structures. Large-holes chewed in bags of food or caches of stored-food. Large-holes chewed in walls and other areas. Live or dead rats and the odors or scratching/scurrying noises associated with them.