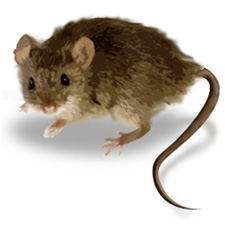 Mice require an opening of only 1/4 inch to gain entry to a structure and infest many homes, businesses and commercial properties, posing great risks and causing much damage to Peoples health and property. They gnaw-on wiring and contaminate food, surfaces it is prepared-on and areas where it is-stored. Rodents are thought to be responsible for approximately twenty-percent of world fires annually and have been linked-to certain hanta virus-strains, food-poisoning caused by salmonella bacteria, as well as the spread of diseases, such as plague, leptospirosis, typhoid and dysentery.

Appearance: The house mouse is dark grey, has a slender small body 1/2 to 1 oz. in weight, large ears and a semi-naked tail of equal proportion to head and body combined. Deer mice, usually appearing in rural, non-urban areas, are a reddish-brown w/ a white underbelly and feet, bi-colored tail (brown on top, white on bottom), have approximately a six-inch body and 2.5 inch tail.

Evidence of: Droppings are approximately 1/4 inch in length and often-found in kitchen-drawers, under stoves and refrigerators, on food-pantry shelving, on the floors of, garages basements, attics and on-insulation or where-ever harborage is available. Burrowing and tunneling in basement sill-plate, attic and other-insulation, as well as dirt in and around structures. Holes chewed in bags-of food, in pantries, cupboards and other food-storage areas. Live or dead mice and the odors or noises they produce from scratching and or scurrying activities in walls and ceilings.

Control methods: Baiting, trapping and exclusion methods are used to bring infestations under control. Nordstrom Pest recommends follow-up service after initial-treatment, to maintain control on an on-going basis, since mice leave behind a pheromone-trail that others will-detect, sending a signal to them that “this is a good place to nest”.